Bat-foe Bane has had an interesting history. Though many fans forgot this for a long time, as he was originally conceived he was extremely intelligent–so intelligent, in fact, that not only did he identify Bruce Wayne as Batman simply by watching Bruce Wayne at a party, but he concocted an incredibly intricate plan to wear down Batman’s strength and will before infamously delivering the coup de grace of a broken back.

Bane was meant as a “dark mirror” to Doc Savage, the 1930s pulp hero whose only “superpower” was that he had been raised to become a paragon of human development–strong, athletic, brilliant, and wise, with an iron will. Bane likewise had an iron will, but his intelligence was deviant, his wisdom corrupted by a lifetime of pain, and his strength augmented by the steroid-like drug Venom, fed to him via tubes implanted in his head.

Since the Knightfall storyline of the 1990s, subsequent writers have struggled to find a place for him in the DC Universe. The writers of Batman: The Animated Series reluctantly gave him an appearance on the show, though they felt Bane, like Superman’s murderer Doomsday, was gimmicky. Among the many crimes of the film Batman & Robin was cementing the impression of Bane as a big, dumb thug. However, his intelligence has usually been evident in the comics, and recently Gail Simone has won praise for her development of the character in Secret Six. And of course, Bane will be front and center in 2012 when he appears as the primary villain in The Dark Knight Rises, played by Tom Hardy.

Like many other Bat-related characters, Bane received a redesign for his Arkham Asylum appearance. Though he still has his distinctive luchador’s mask and Venom equipment, his body is bulked up beyond even the most outlandish depiction in the comics (a result of one of the game’s plot twists, specifically that the Arkham Asylum doctors are developing a much more potent version of Venom). His intelligence was also downplayed, though it’s arguable he was largely under the influence of powerful drugs for most of the game. There’s been some hints that Bane and Batman may actually team up (however briefly) in Arkham City.

Packaging: While the packaging is done in the same style as the other figures in DC Direct’s Arkham Asylum line, I have to comment on how huge it is. Check out the comparison with a standard package–Bane is gigantic. He also weighs a ton.

Design & Sculpt: Bane was sculpted by Phil Ramirez, who has done the work for many superhero action figures over the years. It’s an amazing sculpt and quite accurate, in terms of detail, to the game model. The insane expression on Bane’s face alone is priceless. And one detail I had missed in the game is the creepy cybernetic spine. The Venom backpack and tubes are packaged separately inside the blister; you have to attach the backpack and plug in the tubes to the figure.

My one problem with the sculpt isn’t Ramirez’s fault: it’s a bit too small. As massive as this figure is–and seriously, it feels heavy in your hands–it doesn’t seem to be accurate to the game scale. The fully-pumped-up Bane towers over Batman; he looks to be about eight or nine feet tall. The figure is the same height as the Batman figure, and that’s at the top of his Venom tank–his head is actually lower than Batman’s. The figure is 7 ½” tall at the top of the Venom tubes, which means the recent DCUC Bane is much taller, despite the fact that DCUC is a slightly smaller scale than this line (of course, one could argue the DCUC Bane is oversized).

This was obviously a production trade-off–a properly scaled Bane probably would have had to be a boxed figure and cost twice as much. Does the size factor ruin the figure? It depends on how concerned you are with game accuracy. He’s still huge and looks like he could bring the hurt to Batman. Personally it doesn’t bother me all that much, but your mileage may vary.

Plastic & Paint: Again, DCD seems to have put a lot of money and production value into this line (aside from the scale issue), and it shows in the paint work. While the details are mostly sharp and crisp, what makes the figure is all the great wash work. DCD can do some great paint apps when they try. Check out the redness and irritation around the shoulder implants–yecch.

There are two exceptions, however. One is the red belt buckle/button, whis is overly bright and a little sloppy looking. The other is the tubes. They’re green (because they’re flowing with Venom) and made from a strong but pliable material. It would have been nicer had they been made from translucent green plastic, to suggest the liquid flowing through them, rather than the solid green they went with. It seems like a cost-saving measure to me–that, or perhaps the translucent plastic wouldn’t have held up to the articulation.

Articulation: Bane is a bit more statue than figure, but he does have a ball and socket head, ball and hinge shoulders, ball and socket wrists, a swivel waist, swivel thighs, and ball and socket feet. Still, there aren’t a lot of posing options. A swivel joint at the elbows and the back of the gauntlets would have gone a long way toward adding to the posability.

And of course, I hate figures who don’t have any hip articulation. A t-crotch might have been possible, but again, I suspect its lack was a cost-saving measure.

Accessories: Other than a display stand that hurts more than it helps (he stands fine on his own, and the stand can only fit under one foot, so it makes him lopsided), he doesn’t have any accessories. C’mon, DCD, no Osito? 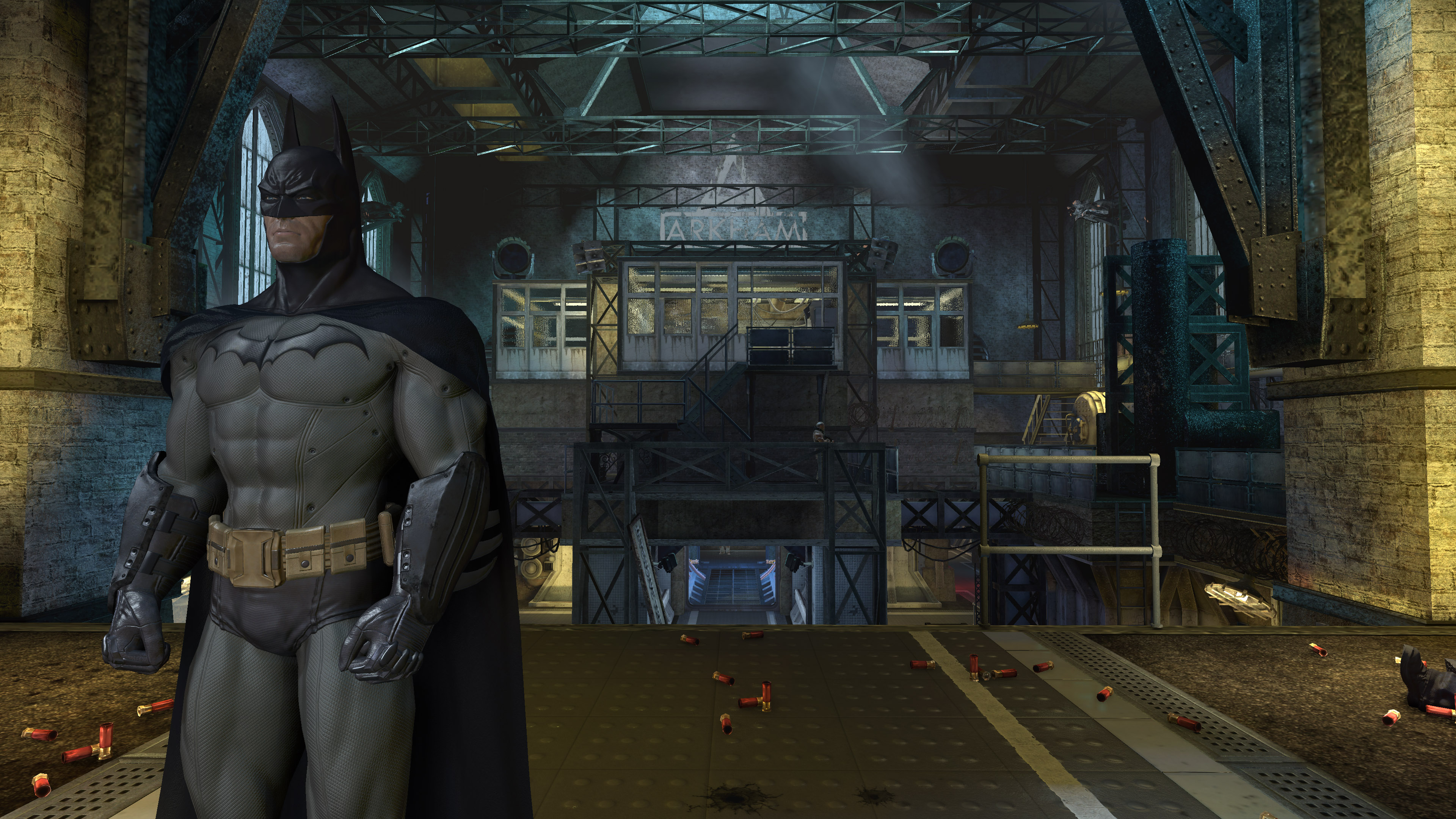 Quality Control: I didn’t run into any problems, but be careful posing his right hand. The two small green tubes feel like they could tear or pop out.

Fun Factor: Not a whole lot, due to his limited poseability and statue-like nature. That said, he is surprisingly fun to mess around with.

Overall: Despite my dislike of statue-like action figures, Bane’s excellent sculpt, ball jointed head and shoulders, and sheer massiveness–along with my general obsession with all things Arkham Asylum–won me over. But he is noticeably out of scale, which knocks him down a bit.

Had he come with a bit more articulation and his teddy bear, he’d be very close to five-star territory.

As a Moments subpage, all spoilers are unmarked as per policy.You Have Been Warned.